Throughout his entire career, Dr. Dre has been many things (revolutionary producer, acceptable rapper, tenuous business man and more), but what’s the one thing that he has probably excelled at the most for the longest duration? Having an impeccable ear for talent. His list of protégés reads like a first-ballot hip-hop Hall of Fame list: Snoop Doggy Dogg, Eminem, 50 Cent, The Game and the list goes on.

Despite a soul-sucking decade-plus long wait and counting for Dre’s theoretical next album Detox, his ability to find engaging new artists is still as sharp as ever, as evidenced by Malibu the second LP from LA singer, rapper, drummer and producer Anderson .Paak. 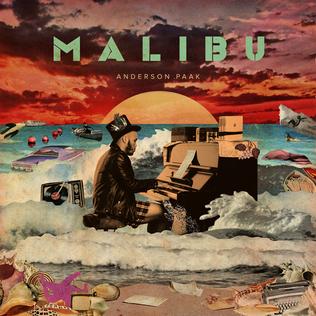 Malibu is a mix of many things stylistically: hip-hop, R&B, jazz, soul, funk and disco, each gently contributing to the flow of the album while graciously not dominating it. This swirling mix of sounds is rooted in a storyline uniting the narrative of the album, .Paak’s story of growing up in the chaotic and unforgiving LA streets. “Your moms’ in prison / your father need a new kidney / your family’s splitting / rivalries between siblings / if cash ain’t king it’s damn sure the incentive”, .Paak raps on “The Season | Carry Me”. The tone of the album, however, is anything but a bummer. There’s ample energy and flair for the duration, but .Paak does an excellent job of grounding it in a self-aware story.

.Paak, of Black and Korean descent, is a drummer by trade. Everything on Malibu is based around the percussion and rhythm, which is smooth, has a good bounce and sets the tone for the swagged-out feel of the album. It’s hard to put on this record and not want to nod your head (as Dre used to say) to many of the lush grooves here. As mentioned above, several styles are represented here, and .Paak blends them masterfully. Each genre is the result of a deep working knowledge and respect for that sound, but .Paak’s ability to make each bend to the will of his persona and story is what makes this album good. .Paak – the stylized “.” in his name, according to him, represents the “details”, which are what got him to where he is – is clearly knowledgeable about each of the styles he wants to use.

The opening track, “The Bird”, quickly establishes a smooth feel, as .Paak gently croons about his fractured family dynamic over a mid-tempo drum, piano and guitar line with a welcomed saxophone solo line on top. “Heart Don’t Stand a Chance” pushes the tempo dial up, however, with a bouncy two-step beat and decadent drum-fill chorus.

Malibu starts trying on different sonic outfits at this point. “The Waters” sound like a cut off of a D’Angelo album with a smoky bassline, hazy drums, and a rapid-fire lyrical flow backed up by a soulful harmony section. The obligatory radio-ready track is next, but it hardly feels like it. “The Season | Carry Me” is a twofer, with the first track produced by Raleigh-based soul sample master 9th Wonder, and the latter a Callum Conner work, both are beat-heavy hip-hop tracks that play perfectly off one another.

.Paak is assisted by some heavy hip-hop names (no doubt the benefit of working with Dre) such as producers 9th Wonder, Madlib and Hi-Tek; and rappers Schoolboy Q, The (aforementioned) Game, Talib Kweli and North Carolina’s own Rapsody, but the album is clearly .Paak’s. His style of vocally singing and rapping while hitting each point in between sounds fresh through the full listen. His voice is slightly raspy and nasal, but easily conveys the cool tone of the album. The lyrics are tight and the hooks are constructed out of some very catchy melodies.

“Put Me Thru” has a heavy rock and jazz influence, with a clean, funky guitar sound in the verse, which transforms into a distortion-filled force during the chorus. “Am I Wrong” is a take on a dance song, reminiscent of the feel on Daft Punk’s Random Access Memories. “Without You” goes back to hip-hop roots and features a heartbroken Rapsody rhyming over a boom-bap beat.

The album isn’t without it’s flaws. Some of the tracks could easily have been left off, sounding more like half-baked song ideas, rather than fully-fledged songs. “Parking Lot”, “Lite Weight” and “Water Fall (Interluuube)”, while evidence of a solid element or two to build on, don’t go anywhere after that. Adding to that is that all three of those tracks surround an otherwise healthy song (“Room in Here”), drowning out that track’s energy ever so slightly.

.Paak makes up for it with the next two tracks, which really drive the second half of the album. “Your Prime” features a staccato flow that could have been a feature on To Pimp a Butterfly. Ironically, “Come Down” is similar to the filler songs I mentioned before, but instead of half-baked beats, this song is anchored by a spectacular, ill-mannered and boastful bass line that would make Bootsy Collins bashful. However, there’s not much more to the song besides the bass line and a two quick verse/chorus exchanges.

The album closes with the ambitious but clumsy “Silicon Valley”, and the nostalgia-fueled sunny-day vibes of “Celebrate” and “The Dreamer”. It’s at this point in the album, however, that the strain from the less-than-necessary tracks take their toll. As an entertainer of any kind, you always want to leave the audience wanting more and these tracks rob Malibu of that feeling in the long run.

Overall, Malibu is essential listening in this young year. A fresh sound from a fresh name, one that honors the magic of the past, while taking the sound into the future. From rapping to singing and even producing a few of the tracks on this album, Anderson .Paak shows that he has the talent and the ambition to build a name off of. Dr. Dre, meanwhile, continues his streak of finding diamonds in the rough.

Like a lot of other wannabe music critics, I sat down to write a Top Albums of 2016 list that…

What Qualifies as Music?

In 2016, I finally sucked it up and bought a record player, a Technics SL-0350 specifically, and named her Apollonia. I’ve…

After yesterday’s look into albums that I found forgettable, it’s time to wash the taste out of my mouth with…

We’re here! We’re finally here. It took literally every last second of 2016 for me to write this (and a…